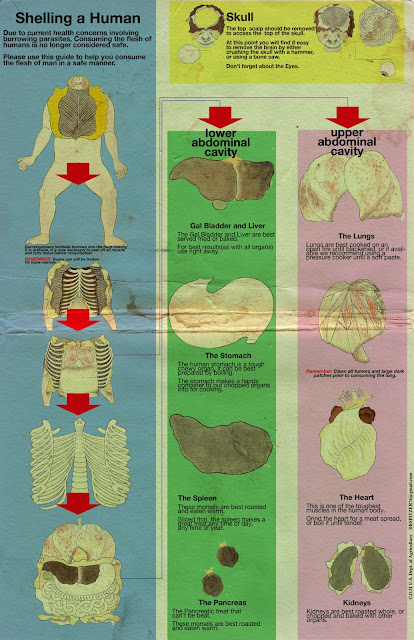 Pretty interesting piece of artwork here.  Click on the image to see a larger version.  It's all in fun right?
Posted by LckyFck at 2:55 PM No comments:

It starts! Grab your forks and dig in! 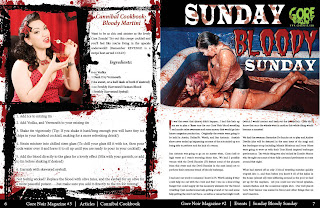 The Cannibal Cookbook theme has been around for awhile.  There's been a few that have "been there, done that" but just because it's been done doesn't mean it can't be done better right?  Well maybe not better per se.. Maybe just different?  We here at Gore Noir Magazine are putting our own spin on the Cannibal Cookbook.  You'll find in each of our magazine issues a different Cannibal Cookbook recipe with it's own little theme and photo to go along with it.

This page is under construction and will be changing very quickly.  Gotta throw up some fancy banners and change the overall layout.. It'll be fun trust me!

I do a lot here at Gore Noir as we are an independently ran and published magazine, so I'm interviewing, finding new people to cover, new artists, designing the magazine, updating the facebook, finding advertisers.  You name it I do it..  I wear all those damn hats..  And I think I wear them decently.  Now that we've went off on that tangent I should get to the reason why we came down this road.  I need to start letting others take some of the load.  Why not let someone jump in and start writing some Cannibal Cookbook recipes?  Get a new fresh take on it?  So I threw the line out of Facebook..  and DAMN!  There were so many people that were interested I was just like.. Well..  Why don't we let it be what it wants to be?  This is 2013 right?  Are blogs still in?  Ah who gives a shit!

Here's where all you culinary cannibals come in.. I need bloggers!  The idea here is to have a nice steady stream of recipes for people to view.  Each one will have images, be in the cannibal or horror theme, and in the end will hopefully be fun to read.  I'm thinking every year we come out with a book of all the best recipes for people to feast their eyes on.  Sounds delicious right?  Interested in joining the crew?  You know we don't pay right?  Still interested?  Send us an email to:  info@gorenoir.com with some of why we should ad you as a culinary cannibal blogger.  Now Eat!
Posted by LckyFck at 12:31 AM No comments: